Gillies Group have you covered.
Here's 5 reasons why:

Why is my tap leaking?

There are a number of reasons why your tap could be leaking, this could range from a damaged tap washer, damaged spindle o-ring, worn tap seat or worn/damaged tap cartridges to name a few. Attempting to fix or replace any of these broken parts without any plumbing experience may end up causing more harm than good and we don’t want that. That’s why at Gillies Group Plumbing we made it our mission to find the best possible plumbing solution that has been tailored to your problem.

First let see which taps you have around your home. The three most common taps found around a home are the:

Now why do they leak?

Mixer Taps are becoming ever popular and common in new homes today. Generally, they are the most reliable tap.

Common reasons for the tap leaking is cartridge failure due to age and debris in your water supply. The debris become jammed in the cartridge causing it to fail and/or your tap to leak. The body seals are also prone to failure over time causing your tap to leak.

Generally, all that is required is a service and new cartridge to fix the leak. In some instances, it may be cheaper to replace the leaking tap with a brand new quality mixer.

The main thing is once you see the tap dripping or leaking, is to have it fixed. Not only to save you on your water bill but prevent any further damage your leaking tap may be causing.

Contain a pair of ceramic discs, one is fixed in place, while the other rotates to allow water to flow from your spout. Over time the ceramic seal between the two faces deteriorates or can become scratched from foreign bodies in your water causing your tap to leak.

Unfortunately, once this has occurred generally the entire spindle will require replacement to rectify the leaking tap. In some instances a generic brand spindle can be used, however, not always.

Ceramic taps can also drip at the base of the cartridge if the seal has perished. It is most important to have this fixed immediately as the longer you leave it, the potential for damage to the in wall plumbing is likely. The leak between the seal and the wall seat will most probably slowly eat the seat away leaving a gauge. The longer this is left the potential for more gauging can occur and it may reach a point where it means repairing the leaking taps will now involve replacing the in wall plumbing.

So small drip from a leaking tap can turn into an expensive exercise rather than a simple economical fix  – if repaired early. 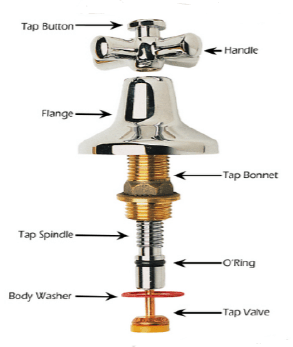 There are Four Common causes for a traditional tap to leak:

The main cause of your leaking tap will be the failure of any one of the above items. The main thing is once you see a tap dripping or leaking, it is time to have it fixed, Not only will this save on your water bill but also prevent further damage.

So STOP the drips coming from the tap and get the leaking tap fixed – the longer it drips the more damage it is causing and the more it could cost you to have repaired.

Whether it’s a leaking bathroom tap keeping you up at night, or a leaking kitchen tap dripping your savings away, Gillies is able to provide high-quality plumbing and gas services to both residential and commercial spaces all across Perth.

Speak to an expert plumber in Perth: Call Gillies Group today or send us an email and we will get back to you in 30 minutes!